Apple's iPad 2 Announcement - What To Look For On March 2 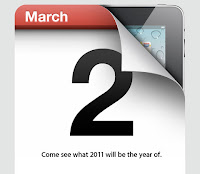 Article first published as Apple's iPad 2 Announcement - What To Look For On March 2 on Technorati.

Well, we've got a date (March 2) and a theme ("Come see what 2011 will be the year of"), so the only question remaining is what the new iPad

2 will officially look and feel like. Here is a 3-2-1 of what is almost inevitably included, what's likely shelved for the future, and what's a possible sleeper pick for next Wednesday's big event.

Three Things Likely To Make It In iPad 2

Thinner and Lighter
One can hardly complain about Apple's first major hardware release in the tablet market as it only managed to exceed sales projections and set the bar for the current flooded field. However, the 9.7-inch "magical device" does weigh in at 1.5 pounds and this manifests itself whenever you hold the tablet up while reading for an extended period of time. A lighter iPad 2 is surely due, and a sub one-pound device carries a spec-friendly number and one that's likely to be accompanied by an emphasis on a much thinner tablet.

Faster and on Multiple Carriers
With multitasking enabled in the iOS 4.2.1 update, the iPad's original 1GHz A4 processor may be pushed a bit, and although it has admirably handled app switching, there is a noticeable decrease in the snappiness that one expects from an Apple product. Thus, a dual core processor seems to be in store to stock the new iPad with the hardware needed to accomplish both what's currently possible and what's possibly in store (see below).

Cameras, Plural
It's almost as if Apple purposefully left out the camera from the original iPad so that they could make a big splash with its addition on the next generation iPad. Surely, the technology was present a year ago, no? Well, next week, we're certain to receive not just one but two cameras and more importantly, full integration with FaceTime. With the iPad 2, Apple will have a huge influx of devices that will end up using the video chat application. Could 2011 be the year of the video chat now that FaceTime will work on the iPad? Quite possibly.


iPad Mini
Although Mr. Jobs has developed a tradition for announcing "One More Thing" in his keynotes, it's unlikely that the release of a 7-inch iPad (the iPad Mini) will be seen next week or even anytime soon. As I hypothesized in an earlier post, Apple may be interested in developing such a product, and no, it's not just an iPod Touch. I do believe there is room for a form factor in between the large iPad and the small iPod, though I concede that this won't be happening before the summer.
More Multi-Touch Gestures
This still has an outside chance to happen, though there do not seem to be many rumors circulating around the inclusion of additional gestures for the iPad. I would love to be able to use two fingers to scroll, three fingers to swipe tabs, and four fingers to flash to the home screen. If not the iPad 2, then I suspect we'll see the iPad 3 feature a decrease in the screen bezel accompanied by the removal of the home button, thus making the future hardware release covered by a single smooth sheet of glass.

Really, One More Thing
OK, so what will be the one more thing? How about wireless sync and/or streaming of one's iTunes via the cloud? This has been rumored for awhile, but I think 2011 will be the year of the Cloud, finally, for Apple at least. We've already seen an Android app that can wirelessly sync music between the computer and a smartphone, so there's no reason why Apple can't accomplish the same feat if not set the bar for how such a service can be implemented not to mention profitable. Although it has been speculated that MobileMe

will be offered for free later this summer, I suspect Apple will unveil some form of a pricing model for all the streaming and file sharing that users wish to accomplish without wires.

For more thoughts on Technology, please consider subscribing to the RSS feed or through email.
announcement apple iPad ipad 2 rumor