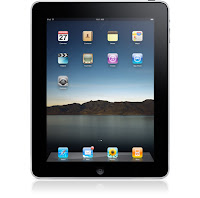 Quick EdTech Timeout (2 full and a 30 second remaining)...It's been a few weeks since that beautiful day (really, the weather was nice), April 3, when the UPS man came and delievered my shiny new toy to my doorstep (2:30pm: finally, I could leave the house!)  I've gotten a chance to use it, play around, download apps, read articles, skim some books, and much, much more. So, here's Part 1 of why I love my iPad...


Initial Impressions
Out of the box, I felt that the device was a bit heavier than I expected.  1.5 pounds doesn't sound like much, but when you have to hold it continously, and in an active reading position, you'll end up developing some new muscles (which we could all use anyways).  I was happy to see that I didn't need to charge it as it came with 90% battery life pre-loaded.  I was also fairly impressed with the keyboard, particularly the landscape version.  The spacing is great, and my typing speed didn't seem to suffer too much.  The problem remains achieving the right typing angle, and this is where the choice of case might play a more important role than it usually does.

Perhaps, the most surprising and welcomed observation was the speed of the device.  I remember writing about how iPhone users used the term "snappy" when describing performance.  If the iPhone is "snappy", then the iPad is definitely "snappy on steriods".  I'm guessing that it's due to the custom A4 chip, but I was amazed at how fast the apps started, how quickly webpages loaded, and how responsive the videos played upon clicked.  Sure, it's annoying to see big gaps in sites that have Flash embedded content, but I was content to see many of my favorite go-to sites (NYTimes, ESPN, TED, NHL, CNN) feature embedded video content that played flawlessly on the device.

Apps that Impress
I'll admit to downloading several apps prior to receiving my shipment in the mail.  Thus, when I connected the iPad for the first time, these apps were transferred over for immediate testing and the following are ones that really stood out the most:

ABC Player - Wow, full streaming episodes of Lost and Modern Family.  Beautiful design interface and quick load times.  Yes, there are commercials just like the website, but well worth the trade.

Netflix - AMAZING.  I've been putting my Netflix subscription on hold, but this brought my $10/month contribution to Netflix back in a hurry.  Instant streaming access to hundreds of movies through the iPad (and through our Wii at home) makes this free app (and even at $10/month) a truly outstanding deal.

SlingPlayer - Although there's no SlingPlayer iPad app yet (please hurry!), I wanted to see this in action.  Apple made a big deal that all existing apps work on the iPad and the 2x scale up is ok, but really, it's just a tease and makes you really want to use every pixel on the gorgeous screen.  I've only downloaded iPhone/iPod apps that I must have.  Other than that, I recommend sticking to iPad only apps.

From the mailbag:
This post is getting long, so I'll continue it at another time and throw in some additional reflections on the iPad's place in the classroom.  Before I leave however, I wanted to answer a few questions from the Chanatown mailbag:

M.T and A.O write:
"We were thinking of purchasing one, (particularly for the e-book functionality) but what do you think of getting only 16GB for $499?   Won’t the content you will want to load fill it up rather quickly?  Have you experienced any of the WiFi issues?  Any chance you got one with a 3GB data plan?"

Great questions.  Honestly, as cool as the e-book functionality is, I don't plan on using the iPad to read books.  I'm not at the point where I want to pull out my iPad on the train to read.  Instead, I'm sticking with good old fashioned paperbacks, preferably free onces from the library.  I will say that books don't seem to take up too much space.  The real space hog continues to be videos.  Thus, I am currently content with my choice of 16GB at $499.  Since I chose to go the early adopter route, I wanted to leave the door open to purchasing a larger capacity, possibly wtih 3G version when prices drop (and yes, they will drop, but I'm guessing not much more than $100 off).  Since I still carry an iPhone and/or a iPod nano, I keep music on those devices.  I don't plan to keep a lot of video on the device either.  My main use with the iPad will be reading web based content in casual places (couch, bed, cafe) and responding to quick emails in those same environments where a laptop would be a bit inconvenient to use.  I also love the iPad for photo display.  Showing pictures to family and friends on the big screen has been a beneficial experience already.  Fortunately, I have not experienced any WiFi issues, and no, I did not get a 3G data plan (I couldn't wait until "late April").  Feel free to leave comments on your iPad experience.
apps iPad netflix review slingbox slingplayer