iPad OS 4.2.1 Update - the day finally arrives, but was it worth the wait? 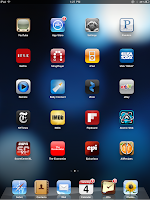 Article first published as iPad OS 4.2.1 Update Finally Arrives, But Was It Worth the Wait? on Blogcritics.

. Users have been patiently waiting on Apple's promise that multitasking, AirPlay, and over 100 new features would be coming to iPad "later this fall." Well, while old man winter is rapidly approaching, Apple did manage to deliver on its promise in time to finish raking those leaves. As fast (or slow) as you can download, install, and update your iPad, here are some initial thoughts and observations on the shiny new update. 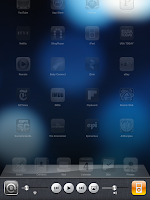 Multitasking - This was arguably the most anticipated feature included in the update, and as speculated, Apple has done a solid job of incorporating apps running in the background. Granted, jailbreakers and Android OS users (including this Droid X toting author) have been accustomed to multitasking for awhile now, and as the hardware and software on mobile devices continues to improve, the days of slowdown while mulitasking may be in the past. Still, the iPad excels in offering a smooth experience. Of course, part of running such a tight ship means that not all apps are able to multitask out of the box. Still, the grand-daddy of the them all, Pandora is one of the chosen few. Finally, I can now stream music while looking at a recipe while in the kitchen.

Unified Inbox, Threaded Conversations - As a heavy Gmail user and one that has multiple accounts, including a work one through Microsoft Exchange, the improved email interface on the iPad was my next most anticipated improvement. I cannot tell you how much time was lost switching back and forth between accounts on the iPad. Needless touching and swiping just to manage a few emails is no longer part of the experience thanks to the fast inbox switching feature. With the unified Inbox, everything is in one place, but those who want to differentiate and keep things separate still have the option to do just that. As a fan of Inbox Zero, I shutter at times when there were over 10 emails in my account. On the iPad, pre-update, I would see all of the messages that were included in a conversation, whereas on Gmail, it would appear as just one line. With threaded conversations, Apple embraces the Gmail look and feel, and that gives this author lots of warm fuzzies. 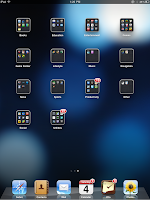 Folders - I try to keep the number of installed apps on my iPad at a minimum to preserve space on my 16 GB iPad. Still, I've managed to accumulate over 60 apps that now span several home screens. Although I tend use the first page apps most frequently, some organization would provide an assist for apps that get buried beyond the first two screens. Folders help address the issue, and by categorizing applications, I get a better sense of what's on the iPad along with some help in determining whether I really need another productivity app when there's already four going unused in the folder. Not the most exciting part of the big update, but folders are a welcome addition.

Gamecenter - Perhaps, not as much of a surprise but rather a forgotten component for me, Gamecenter provides users an opportunity to connect with each other on multiplayer games. I'm not much of a gamer, but I was excited to see what was available and how the interface played out. I was pleased to see that I could use my existing Apple account, and that many of the more popular offerings were free apps, so I promptly became hooked on Jewel Craft ($0.99, Lite Version for Free), Air Hockey, and Flight Control ($4.99). The number of quality games is still minimal, but perhaps the holiday season will bring many more iPads to households, thus increasing the audience size for developers.

AirPlay - Although one would hardly call the AirPlay feature a surprise, I am including it here because I was pleasantly surprised at how well it worked. Finally, not only can I stream Pandora in the background, but I can now play the music through my home theater sound system (via Apple TV, naturally). I don't have many videos on my iPad, but I do have a ton of photos, and it's pure joy to see our newborn son in full color on a 46-inch flat screen LCD. If the laggy performance of photos is any indication, though, I can see why Apple is being cautious in going full speed ahead with video streaming. 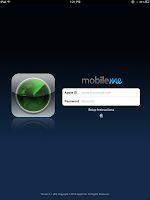 Find My Phone - This was the biggest surprise as Apple decided to include this former MobileMe subscription feature free as part of the update. With a recent television commercial promoting LookOut, a security and backup solution for Windows, Blackberty, and Android phones, Apple may have been inclined to join the fray and push this feature out to the masses in order to garnish some positive publicity. Once you set up your account (your Apple ID account can act as a Mobile Me substitute) the application is straightforward, as I like having the ability to send a direct message, remote set a passcode, or even wipe the iPad from any location at any time. As more and more information gets stored on my device, the greater the risk of losing all of it, and a four digit passcode just isn't going to keep things secure forever should the iPad get lost or stolen. 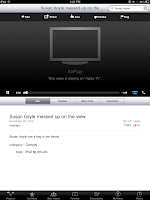 AirPlay - It's been pretty well documented now that AirPlay does not work with popular video apps such as Hulu and Vimeo. Apple does tease users a bit with sound being allowed to stream from several apps, and while this is useful for items such as Pandora, getting more sound while still using the 9.7 inch diagonal screen on the iPad for the video component just isn't too practical. Thus, the iPad still does not pose a threat to the home theater computer entertainment systems found in many technophiles' living rooms. Perhaps, Apple realizes how the Mac Mini still serves a purpose in that arena, and will keep the clamps shut on AirPlay as a result.

AirPrint - I'm going to have to wait to test out AirPrint since I don't have one of the 11 compatible printers currently available. Apparently, Airport Express printers will not work either, so my master plan for total wireless domination needs to be shelved once again. Forum chatter reveals an application (Printopia) that lets you send print jobs from the iPad to your Mac or to the printer directly, but this requires 1) that you use a Mac, and 2) that the Mac connected to the printer is powered on. Still, it's a nice workaround for a reasonable price ($9.99), though you just wish Apple would include this functionality with its own OS.

Airport Express - One thing is for certain when it comes to the introduction of AirPlay on a larger scale: the sales of Airport Expresses and other third party hardware solutions that utilize the wireless playback capabilities are about to get a huge bump in sales. I'm already watching several auctions for an Airport Express on eBay ($40 is easier to swallow than $99 for a WiFi router), and I suspect others will be doing the same or plunking down a C-note in exchange for the ability to play your music wirelessly through better speakers anytime, anywhere. It will be interesting to see how quickly and broadly the list of AirPlay approved apps grows because if it is allowed to include popular ones such as Hulu, then AirPlay does become the game changing piece for the iPad (and Apple TV) that many have been anxiously awaiting.

With Thanksgiving and the holiday shopping season just around the corner, 'tis the time for wanting more, and as mentioned above, the iPad update and particularly, AirPlay, leaves us indeed craving additional features.  Apple has given us a taste of an amazingly convenient piece of technology, but then makes it just a bit inconvenient by limiting its usage. Still, users including this author will be satiated for the most part with the feature packed iOS 4.2.1 update. As Mr. Jobs stated, the new software makes the
iPad a "completely new product", and it comes just in time for Turkey Day. Gobble, Gobble!


For more thoughts on technology, please consider subscribing to the Chanatown feed.