I still remember the day when my school's Tech Staff Developer came and delivered a Tablet PC to my classroom.  "You're a Tableteer, now!" he said, and sure enough that day changed a lot of how I taught Chemistry to my students.  One of the keys to effectively using a Tablet PC is taking advantage of the inking capabilities of the Tablet along with the mobility of the laptop computer. Thus, a wireless connection to the projector is highly desirable and therein lies an interesting conundrum, especially since our school did not have its projectors placed on our network, nor did we have a wireless environment. Instead, we used third party peripherals to address the issue, and for the most part, they've done the job.  Today, we take a look at a similar device (the VStream Wireless PC to TV Audio Video Streamer) designed to take that same scenario and apply it to your home, your office, anywhere, really.  Read on to find out how you can project your computer onto your HDTV.
Setup

Contents inside the box were familiar as we've used these devices at school.  You have a receiver unit that connects to the monitor/television, in this case, through an HDMI cable. The other piece is the USB adapter (or the infamous "dongle" as we refer to it at school) that connects to your computer.  I was pleased to see the HDMI cable included as the Apple TV failed to include one in their package.  There was a CD which contained the necessary drivers for installation.  Problem: I was using a laptop that did not have an optical drive.  A quick trip to the Diamond Media product website, and I found the required download package with ease.  Insert dongle into computer, connect receiver unit to my television, and five minutes later, I was finishing the last of the six step quick start guide.  I was soon looking at my computer screen on my 46" Samsung HDTV in glorious 1080p. 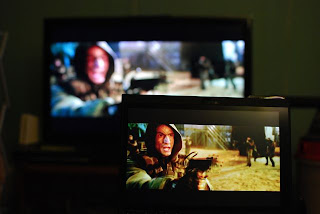 Of course, one doesn't want to just look at a static Word document when using an HDTV as your monitor.  I quickly fired up some video to see what this device was capable of handling.  YouTube videos played fluidly, and one of the best parts of the VStream device is that audio is streaming through the television.  I was able to control the volume not through the computer but through the television which takes full advantage of the more powerful speakers.  Netflix was next, and after logging in to my account, I was viewing instant streaming videos again without a single hiccup. It's only when I tested out Hulu that things got a little choppy. I noticed a small difference in playback quality between my computer screen and the HDTV, but if I switched to projector only, the differences were no longer noticeable and viewing was more than tolerable. It should be noted that the USB adapter heats up a bit, but hey, you would get toasty too if you were streaming that much data 20 feet across the room.  Photo slideshows and streaming audio sites (Pandora, Grooveshark, etc.) all worked without a hitch. 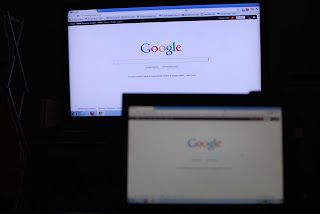 As mentioned above, compared to some of the other PC to TV units that I've worked with in the past, the Diamond Media VStream impresses both with its ease of use as well as the additional capability to send audio through the HDMI connection.  I did not lose the stream once during several tests, though it should be noted that I was relatively stationary and did not venture more than the maximum recommended allowance of 30 feet. I can envision a wide array of uses for this device. Aside from my ties to education (where we regularly connect computers wirelessly to projectors in the classroom), I can easily see how the VStream can make an impact in the corporate sector.  Since few laptops contain HDMI out slots, this device makes it possible to display one's laptop on a large screen television, ones that are becoming increasing more common in offices and meeting rooms.

As I'm preparing this review in a hotel lobby, I could also see bringing the VStream device with me on leisure or business trips and quickly setup my room's flat screen TV as a second monitor or better yet, as a home theater for streaming. With more hotels providing free wireless, I could stream free content with ease or rent movies online without paying the exorbitant fees commonly charged with in-room entertainment. The only gripe so far?  A lack of support of Apple devices. This is to be expected as Apple strives to make its Apple TV product the solution to streaming. Until they get everything solved on their end though, I'll likely continue keeping a PC around in case I want to stream anything I want on the big screen all without the wires.

Diamond Media provided a review unit for this article.  The product can be purchased from their website or through several online partners for $129.99.

For more thoughts on Teaching and Learning Technology, please consider subscribing to the RSS feed or through email.  Facebook fans - Chanatown could use some support.  Give us a "Like" today.
hardware pc2tv review streaming vstream

Clay said…
Most projectors now come with an HDMI input, so I bet this would work with them as well, helping with presentations.
October 27, 2011 at 3:25 PM