ClamCase - The Best Keyboard Case for the iPad

By chanatown - June 23, 2012
Article first published as ClamCase - The Best Keyboard Case for the iPad on Blogcritics. 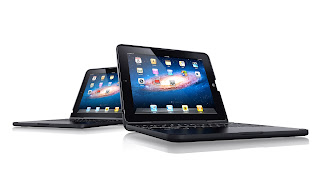 In the course of a year, I have tried on and evaluated numerous cases for the iPad, many of them being of the keyboard case variety. None of them are quite like the ClamCase. I have had a ClamCase review unit for several months now, and I have found few flaws to note with its usability and design. I originally saw the case being used at a local technology conference, and I was so intrigued by it that I wrote to the company requesting a unit to evaluate. A short time later, I had the unit in hand and with a lot of real-world experience hours now logged, I can comfortably say that this is the best keyboard case currently available.  Read on to find out why.


A keyboard case that works
As mentioned in the intro, I've tested quite a few keyboard cases for the iPad. Unfortunately, many of them fell short in some capacity whether it was a slow to respond to Bluetooth or an incomplete feature set.  If there is one aspect of a keyboard case that is considerably vital, it is the typing experience.  The ClamCase delivers one of the best keyboards this side of a Macbook Pro or Lenovo ThinkPad. Unlike cases that have small, cramp, or sticky keyboards, the ClamCase keyboard produced one of the fastest typing experience that I have had for an iPad accessory. This includes the Apple made Bluetooth keyboard, which I never got accustomed to using since it was always its own separate entity. In terms of connectivity, the ClamCase responds with accuracy and speed via Bluetooth 2.0.  A few taps on the keys and the case pairs up with the iPad within seconds. Unlike most iPad portfolio cases and Apple's own Smart Cover, the ClamCase has an unlimited number of viewing positions due to a well designed and durable 360 degree hinge. I've been able to use the iPad to Skype and FaceTime from a variety of angles, a very handy feature when setting up a chat between our baby and his Grandpa. 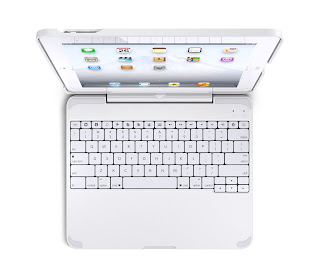 But it's still a Tablet
One of my biggest complaint with most keyboard cases is that they all came in a portfolio style case.  This means that when using the iPad outside of the landscape/typing mode, you have an awkward, bulky, and often unwieldy predicament. The ClamCase makes it a point to provide a Tablet handheld position as the keyboard swings completely around a sturdy hinge and hides behind the iPad. You can quickly swivel the keyboard back to enter landscape mode or close the case entirely with a series of smooth motions. The solid hinge makes the entire case feel solid (if a bit heavy) and the makers of ClamCase complete the experience by providing multiple dedicated keys for shortcuts including one that reverts back to the on-screen keyboard in Tablet mode. Other very useful shortcuts include dedicated buttons for search, cut/copy/paste functions, volume control, and home/lock keys.

Why this is the coolest case around 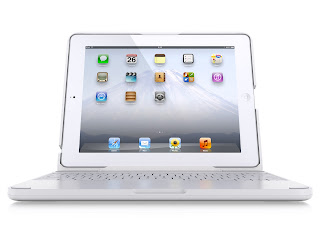 No other iPad case that I have tested thus far has been as reliable (zippy Bluetooth connection for the keyboard), sturdy (again, a bit heavy, but solidly constructed), and eye-catching (plenty of comments about the case). In fact, when using the case in landscape mode, I am often asked what touch screen laptop I am currently testing. I have kept the ClamCase on for over a month now, and I am that much closer to being able to use the iPad as my sole computer and not have to lug around a full sized laptop. That being said, there are times when I want to use the iPad just as a Tablet without the case entirely, and I'm been pleased with how easy it is to release the device from the case. The case has easily survived on a handful of charges over these past few months, and I've even been able to squeeze in the new iPad despite the case being sold originally for the iPad 2.  ClamCase has released an updated case for the new iPad, but rest assured that if you happen to pick up the iPad 2 version, the case will be a good fit.

As mentioned above, my only major complaint is that the case adds a considerable amount of heft to the iPad. Compared to a laptop though, you'll still be clocking in at under three pounds with the iPad and a full QWERTY keyboard case.  For future iterations, I'd be interested in seeing improvement in the keys (chiclet keys or some tapered edges would be welcomed), as well as backlit keys (SealShield's case gets the feaure nod here). I would also be interested in a magnetic closure or even a small latch to make it more secure when not in use.

The ClamCase is available in black or white for $149 direct from the company's website.

For more thoughts on Teaching and Learning Technology, please consider subscribing to the RSS feed or through email

Facebook fans - get the latest posts, thoughts, musings, and giveaways. Give us a "Like" today.
bluetooth case clamcase iPad ipad 2 keyboard new ipad