The New iPad - Worth the Wait, Worth the Purchase? 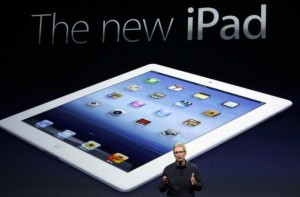 Article first published as The New iPad - Worth the Wait, Worth the Purchase? on Blogcritics.

So, you've likely heard by now that there's a new iPad (just don't call it an iPad 3). Well, that wasn't the only announcement from Apple's Wednesday keynote event. And many wouldn't call the iPad reveal too surprising as rumor sites pretty much nailed down the specs on the device weeks in advance. Still, there is much to discuss, including whether you should be buying the updated version and one more thing that might end up having a greater impact on your life, regardless of which new iPad you end up purchasing. Read on to learn more.


The Keynote
As noted above, there were not many surprises when it comes to the details. Perhaps, the biggest one was the new name (or lack thereof). No iPad 3, no iPad HD, no iPad Retina, just the new iPad. The new device will ship (as expected) with a retina display (boasting 3.1 million pixels), an updated processor (custom A5X with quad-core graphics chip), an improved camera (similar to what is found on the iPhone 4S), and in what was a hoped for but not 100% certain rumor, 4G/LTE options. Pricing remains the same for the models ($499/599/699 for the 16GB-64GB WiFi, $629/729/829 for the 16GB-64GB 4G), and the iPad 2 will remain on sale for $399/529 (16GB/3G). Also announced during the event was an updated Apple TV and several software/app updates.

The Analysis
Was the new iPad worth the wait? Perhaps. On a yearly refresh model, the new iPad brings the crazy rich retina display and those that travel for a living will probably be buying in on the speedy 4G access. I can see companies purchasing more 4G enabled iPads for their employees as opposed to a laptop with a mobile broadband plan. Since the form factor is nearly the same (the new iPad is slightly thicker and heavier), the new iPad won't be viewed as a dramatic change as was the iPad 2 when compared to the original. However, one interesting subplot will be how the continued sale of the 2nd generation device at a lower price point will impact Apple's sales. My guess is that it will broaden the device's appeal to even more customers. Since you can now save $100 on an iPad that is still ahead of its competition and nearly as good as the new release, customers interested in bulk purchases (corporations, schools, etc.) can now shave 20% or add that many more devices to the order (Apple's preference).

One more thing (sort of)
Although the details of the new iPad's release were pretty much locked in before, Apple still had a few worthy updates that flew in under the radar. One that is particularly interesting is the release of iPhoto for the iPad. The photo organization/editing program that I rely upon is now available as its own app, and those who have not using iPhoto before are in for a treat. At $4.99, it's a no-brainer purchase, and I look forward to preparing a full review in the upcoming weeks. Do note however, that the app is not supported on the original iPad, and early App Store reviews are quick to point this frustrating fact out.


The new iPad is available for pre-order in the Apple Store. It will deliver and be available in stores on March 16.


For more thoughts on Teaching and Learning Technology, please consider subscribing to the RSS feed or through email.

Facebook fans - get the latest posts, thoughts, musings, and giveaways. Give us a "Like" today.
apple ipad 3 keynote new ipad review