How to Upgrade Your Cell Phone While Still Under Contract

By chanatown - January 14, 2012
Article first published as How to Get a New Cell Phone While Still Under Contract on Blogcritics.

On one hand, I can't believe it's been almost two years since the 2010 Summer Free Agency where I was contemplating several phones in an event that paralleled that of a certain famous basketball player. On the other hand, I can't believe that I'm still under contract for my beloved Droid X. I haven't even reached the early bird upgrade discount set for March 2012. In the meantime, I see many of my friends and families toting around new devices and more importantly blazing along at faster 4G LTE speeds. I couldn't take it any longer, yet I didn't want to break contract or (gasp!) pay full retail price on a new phone. Read on after the jump to find out how I upgraded my phone and how you can do the same, all without breaking your contract or your piggy bank.
So, the first thing I needed was a phone. I didn't care whether it was new or used, but I didn't want to pay a huge amount for the phone. Therefore, this excluded the certified pre-owned phones that Verizon offered; these devices were running near full retail price (over $400) when purchased without a contract. Having a fair amount of eBay experience, I turned to the online marketplace and found a huge inventory to choose from. I knew that I wanted an upgrade from my existing Droid X, and I wanted to try out the 4G LTE network that Verizon has been heavily advertising. I was also realistic in that I would have to settle for a phone that has been out for a while, and not expect to pay half price for a brand new model like the Samsung Galaxy Nexus.

The Online Marketplace
Although not for the completely inexperienced, purchasing a used phone on eBay has become a lot more common and safe. I narrowed down my search to an HTC Thunderbolt, which as the first Verizon 4G flagship phone, received a great deal of hype and sold quite a few number of phones as a result. The device also came with some battery issues, though this proved to be the perfect combination of supply and demand that enabled me to pick one up for relatively cheap on the secondary market. 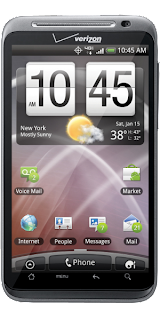 Before You Purchase
Some things to consider when purchasing a used phone include the condition, the ESN, and a SIM card. As mentioned above, I didn't care that whether the phone would be in mint condition or not. In fact, you can often tell that a phone is going to be in pretty good shape when it is sold by a single user (as opposed to mass phone resellers) and the description mentions things like "screen protector" or "carrying case". We gadget lovers tend to protect our devices with care. That's not to say that the big sellers are to be avoided. I've found a good deal on a phone for my wife as a result of a mass seller having so many listings that they end up getting fewer bids.

Having a clean equipment serial number or "ESN" is another thing to consider and you'll often see a seller's description include something about having one. There are websites that offer free ESN checks, so if you're a seller, it may help boost confidence among your buyers if you include this in your description. Lastly, when I tried to activate my new phone, I was told that I needed a new 4G SIM card. Although inconvenient, I was pleased to find that Verizon company stores (official ones, not just any mall stand or retail shop) offer a new SIM card for free, while the other stores may charge you a fee.

No Buyer's Remorse Here
I could not be more pleased with the decision to upgrade my phone. The device provided me with an opportunity to experience the 4G LTE network without paying through the roof for a new phone. I get the experience of having a "new" phone with different and in most cases improved features, and I'm still on track for an upgrade in the spring and a new contract later in the year. If you're tired or dissatisfied with your current device, or you've been intrigued by a more recent release, know that you do have options, and that a new and improved phone is never out of the realm of possibility.

Facebook fans - get the latest posts, thoughts, musings, and giveaways. Give us a "Like" today.
cell phone guide how-to upgrade