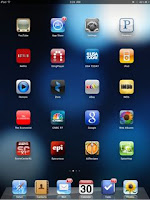 
As we usher in 2012, it's amazing to consider that it's only been two years since the original iPad was released (April 2010), and 2011 marked the introduction of the iPad 2, the lighter, more advanced version of Apple's "magical device". Two years' time has also brought hundreds of thousands of apps to the App Store and with such a large array of programs to choose from (both in terms of quality and price), it's nice to refer to end of the year lists to build one's collection of must-have and yet-to-discover apps. As I did to end 2010, I'm preparing two lists - the best paid apps and the best free apps of the year. Some may be updates while most will be new programs entirely. Hope you find something new and useful for your iPad from 2011.

Entertainment
Although not new in 2011, drawing applications such as Drawing Pad ($1.99) and SketchBook Pro ($4.99) are gaining a lot of traction as a result of third-party iPad styluses flooding the market on the cheap. These "pens", though simple in design can make the difference over a quality drawing done by finger, and as the tips become more refined, the iPad as a note-taking, drawing and organizing one-stop machine becomes more a reality.

Finance
Bills for iPad ($0.99) - Also not new in 2011, but with updates this app has jumped to the top of the Finance category. For the new year, keeping track of one's finances is always a solid resolution. Bills for iPad offers a very rich visual experience for having a bill paying calendar, with different colors representing multiple categories. For a buck, saving time on bill paying and money on late fees may be the best reasons to make this one of your first purchases of the new year.

Games
Electronic Arts ($0.99) - You'll know there's an EA sale going on when you see a bunch of the company's apps climb to the top of the charts. Recently, I purchased Tiger Woods PGA TOUR 12 and have been logging in some hours on SimCity Deluxe.  I haven't pulled the trigger on Madden 2012, only because I ended up not playing 2011 very much. Still for $0.99, it's hard to argue against stocking up on these usually high quality games.

Lifestyle
Pimp Your Screen ($0.99) - Although customization features are not nearly as robust as those found on Android devices, Apple iPad users can still have some say in the look and feel of their device (and even more so if they jailbreak). This application offers the usual set of high quality wallpapers, app shelves and other little visual pieces of eye candy, yet PYS stands out by including both a home screen and lockscreen maker allowing you to take even more control of the design process.

Music
GarageBand ($4.99) - With the release of the iPad 2 came one of Apple's most beloved programs, GarageBand to the tablet. Although the app is certainly less featured than its more expensive computer counterpart, GarageBand still brings a powerful and user-friendly experience to the mobile device, and the app provide learning opportunities for students in classrooms or a music-making experience to the casual user without needing access to a full media center.

Productivity
Notability ($0.99) - There are a ton of notetaking apps out there, and I continue to be a major proponent of Evernote for its cross-platform goodness. However, Notability caught my eye for its growing feature set including the rich handwriting features, PDF annotation, and wait for it...linked audio recordings! Similar to a LiveScribe pen, which I love, Notability offers the ability to tap on words to hear what was said at that moment. One of the most feature rich applications available and one that could be a must-have in education.

Social Networking
MyPad+ ($0.99) - Although Facebook finally came out with a native app, the release came with a lukewarm response from reviewers. For a mere buck, iPad users can have a fuller featured Facebook experience in MyPad+ and it proves that developers that got a head start in the Facebook app field will still be able to reap dividends by providing a solid quality product experience.

Google Apps Browser ($2.99) - As Google Apps gains more traction in education and as iPads become more common in the classroom, the need for a smooth working Google Apps experience involves either an improved iPad experience from Google or some ingenuity from developers such as G-Whizz. An improved experience (though understandably not nearly as good as the Docs app on Android) awaits those who purchase this app, though I wouldn't recommend schools purchasing bulk licenses just yet. I'd anticipate that Google will focus on improving their Apps on iPad experience, so 2012 hopefully will bring a native Docs app to Apple's device.

Travel
Azul Media Player ($1.99) - Hidden in the Travel apps section is this helpful tool for downloading videos on the road (hence, the travel categorization). Azul eliminates the need to sync to the computer, as you can download videos for later viewing over the hotel or coffee shop WiFi. The multitude of file formats bump Azul to the top of the list for these types of applications, as all the usual suspects (.mpeg, .m4v, .wmv) are fairly represented. In addition, a streaming (i.e. no download needed) feature is in beta and could make this app a must-have in 2012.

Utilities
Photon Flash Web Browser ($3.99) - Users still want their Flash, and developers are finding ways to get it to them. Using cloud virtualization, Photon allows you to view some Flash content including the popular gaming site, Kongregate. Many swear by this while also complaining that Apple doesn't allow Flash on its native Safari browser. I tend to get by knowing that Flash won't be an option when using an iPad, but if you'd rather not be constricted, Photon or its competitor Skyfire should do the trick.

Looking for some freebies? Check out The Best Free iPad Apps of 2011.

Facebook fans - get the latest posts, thoughts, musings, and giveaways. Give us a "Like" today.
2011 apps best iPad ipad 2