Can you imagine a scenario where you would be able to take photos using your digital camera and when you got home, they were already organized in iPhoto, or even on your mobile device within minutes? Is this some Apple iOS magical update or a new cloud miracle from Google? Nope. Just a simple SD card that happens to have wireless capabilities built-in. What does this mean for all the wires and cables that you currently use to connect your camera to your computer? Keep them where they belong - in a drawer - and get ready to truly go wireless with the Eye-Fi Wireless Card.

How does this work?

The Eye-Fi website already has a solid walk through of the technology, but essentially, it goes something like this. The memory card (currently offered as a SDHC card) has built-in Wi-Fi, so when you are connected to your home wireless network (or add up to 32 networks in total), your photos will seamlessly be transferred to your computer (you'll see them as they are imported). You can also have them automatically uploaded to a sharing site such as Facebook, Picasa, mobileme or flickr. If you're like me and take tons of pictures only to sort, organize, and delete later, you can take advantage of "Selective Share" which allows you to use the lock/protect feature found on your camera to designate the photos you wish to share while backing up the entire shoot.

Does this really work?
I was so excited to start testing this product when I purchased it. I installed the software (Eye-Fi Center) on my Macbook (available for Windows as well), and after a few settings, that part was complete. I then inserted the Eye-Fi card into the SD slot, thus freeing up a memory card that I can use for something else. After snapping a few shots, I was amazed to see the photos being transferred (without any additional prompting) directly to my computer, as well as into an online album on Picasa. It was that easy - no longer do I need to connect the cord from camera to computer, or eject the card and insert into my computer, upload the photos both to the computer and onto the web. All of this is done in one step, and it is done with minimal effort after the original simple setup. One thing to note is that the camera must be powered on in order for the pictures to transfer on your network, but this makes sense, and it is a small price to pay (solution: setup auto shut-off on your camera and call it a day) in exchange for the amount of time and effort you'll save by using the Eye-Fi. 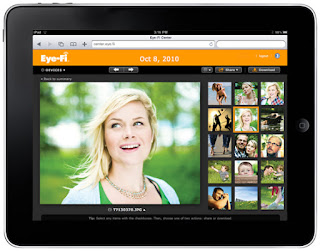 Why haven't I heard of this already?
Honestly, I don't know. I became aware of the Eye-Fi at a recent Discovery Education event, and although I've only had it for a few weeks, I can't imagine going back to a non-Wi-Fi card. For those interested in shooting in RAW, there's the top of the line Pro X2 model which wirelessly transfers RAW photos as well. The Eye-Fi card is a true game changer, and is certainly a "must-have" gadget addition to anyone interested in simplifying the photo archiving process. No more cords, no more duplicate uploads, no more problems.

Eye-Fi sells its cards both online and through bricks and mortar retailers such as Best Buy, Target, Walmart, and Office Depot. They currently range from $49.99 to $99.99.

Facebook fans - get the latest posts, thoughts, musings, and giveaways. Give us a "Like" today.
camera card eye-fi review wireless