Exclusive Preview of TheBlu: Where Art and Entertainment Meet the Ocean

By chanatown - November 03, 2011
Article first published as Exclusive Preview of TheBlu: Where Art and Entertainment Meets the Ocean on Blogcritics.

What do you get when you put the ocean onto the Internet?  According to several computer programmers, animators, artists, and the director of MIT's Media Lab, it would look something like this:


I was treated to a private demo preview of TheBlu, a new artistic venture that combines art and entertainment, and had a chance to chat with one of TheBlu's co-founders, Neville Spiteri. 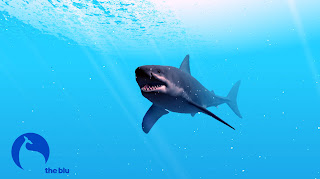 That's the question that I had when I first navigated to the website in advance of my preview.  The tagline "The ocean on the web" is catchy, but just as the ocean is vast, so is TheBlu. One is greeted with a well produced introduction video along with several links to some FAQs and developer bios. However, the true exploration begins when you actually enter TheBlu and start "swimming" through the vast waters and watch, tag, and interact with the species that appear on your screen.

Immediately upon entry into TheBlu's interface, you are welcomed to an underwater view of a specific region of the world. Different species of aquatic wildlife are all available to be explored simply with the click of a mouse. Exploration is the name of the game as one can use the mouse to navigate through the vast oceans or choose to follow a particular fish as it roams through the waters. You can explore multiple habitats by allowing a fish to travel, and within seconds you'll be transported from the African Coral Garden to the Australian Open Waters. TheBlu operates as a web application that's compatible with all popular browsers and brings a 3D world to your screen. 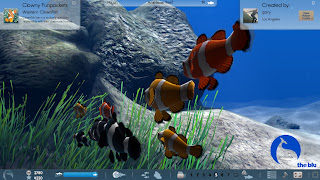 Social media is a key piece that's immensely integrated into the application. Users are encouraged to learn more about the creators of everything in TheBlu, from rope sponges to razorfish. Clicking on the species reveals a link to the maker's profile, and options to "Become a fan" or "Connect" with the creator become available.  Developers emphasize that TheBlu is created and sustained by users, and they want people to connect as they normally do within social media, but at the same time celebrate art, the web, and the Ocean.

As a teacher, I came in with an education lens, and I believe that the classroom is going to be a potential heavy user of TheBlu.  The entire experience is reminiscent of an high end science center or modern aquarium exhibit, the kind where there's a large display and you have to wait your turn to try it out. The big difference is that with TheBlu, anyone can explore at any time, all without having to pay the price of admission. Clicking on species reveal information that will only get expanded upon as the community grows, and the encouragement of users to create and design new species also contributes to the learning experience at hand.

Into the Deep Blu

According to Mr. Spiteri, one of the primary goals of TheBlu is to use the web as a new artistic medium for storytelling, offering an opportunity to connect individual users and artists with each other in a large scale mashup of art and entertainment that's inspired by the Oceans. In essence, the site is for everyone from engineers and artists to educators and students. 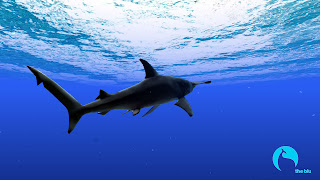 Mr. Spiteri noted that the response by artists has been great, with lots of contributions coming to TheBlu regularly. The reception of application has already exceeded their expectations as word of mouth continues to spread and large organizations begin to back the project. During our interview, I mentioned my thoughts on how the application reminded me of a museum exhibit, and sure enough, the group recently had an event at the Museum of Monterey promoting a new permanent exhibit and an ongoing collaboration.

I also inquired about the motivation of contrubutors to TheBlu to which Mr. Spiteri responded that the recognition, the connection with peers, and the mentoring opportunities that exist (having an opportunity to work with the Academy Award winning Animation Director for Avatar doesn't hurt) are all reasons that drive users to offer their talents to TheBlu.  Although monetization is a integrated component, most creators are more interested in the connectivity that this new medium offers and how it begins to explore the combination of storytelling, digital art, and collaboration via the expansive ocean. 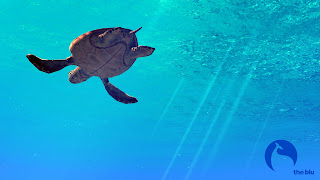 Finally, I asked about a potential sequel ("TheGreen", perhaps?) focusing on creatures and species landlocked, and Mr. Spiteri noted that it's something that's definitely been in discussion.  Until then, we'll just have to continue exploring what's available in TheBlu, watching it grow and checking out new opportunities as they arise.

TheBlu is currently running an invite-only private beta. You can find out more and request an invite by visiting theblu.com.

Facebook fans - get the latest posts, thoughts, musings, and giveaways. Give us a "Like" today.
art entertainment ocean preview review theblu web