Back to School Updates - Animoto, Prezi, and More

Now that we're midway through October, it's safe to say that we're officially back to school.  As I'm sure it has been with most teachers, the first weeks of the school year have been a whirlwind, and it's no different as the Technology Integration Specialist. Making sure that things are up and running on the hardware side, as well as supporting existing users of software and web applications, and integrating new technology with new classes, only now have I had the chance to breathe a bit and catch up with all that is new in the world of edtech. And boy, was I greeted with some goodies! Continue on to see what's new with several of my favorite tools.

The changes to Animoto have more to do with layout and design than functionality.  However, one can argue that the simplified layout will help users get more functionality out of the already user-friendly product. The new look is cleaner, and the all-in-one layout means that students and first time users will have a much easier time figuring out what to do and how to create their video.  The larger image previews and viewing the words on the thumbnail will help in the editing phases.  Finally, not having to wait until the end to change the length and pacing but instead accessing these options along with the title and description via the new advanced settings in the upper right adds to the all-in-one theme of the upgrade.  There remains core functionality that needs to be improved upon (more control over the alignment of audio with the images and multiple music files are popular requests). However, the developers acknowledge that this upgrade is just the beginning, and one of the reasons I love Animoto so much is actually how little video editing capabilities it does offer. This ensures a more than reasonable learning curve for both our teachers and our students. 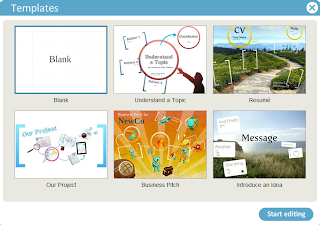 As I was preparing a presentation for our school district, I was excited to see the number of large scale changes to Prezi and what they potentially add to the core functionality of the program.  The first thing I noticed upon logging in was the option to select a template.  As I mention below, I really like having a blank canvas to work with.  However, for those with a clear idea of what they want to use Prezi for, a pre-formatted presentation can offer a quick and easy way to get the idea across without full knowledge of how to use Prezi. I also found the insert drawings to include some new items that I had not seen before the summer, including an editable  timeline graphic that I put to use right away.

Next, the small but useful change of including the play button instead of the "Show mode" was well received by this user. I probably just missed this before, but the ability to rewind to the beginning is included with the play button (click and hold the previous arrow), and this saves me from clicking the back button multiple times to rewind.  Lastly, path thumbnails seem to be a recent feature that I put to extensive use immediately.  Instead of dragging dots to add and delete slides from the path, there is now a row on the bottom that shows thumbnails and the path or the order in which they will appear. Similar to dare I say a "slide sorter" in PowerPoint, the path thumbnails provides a much needed interface for users to quickly organize and reorganize their presentation.  Drag and drop functionality works smoothly as would be expected.  For the on the Prezi updates, click here for what appears to be the Prezi YouTube channel.

It seems that Prezi quickly establishes a love or hate relationship with new users.  Some are immediately captured by the rotation/zoom effects, while others dismiss the tool as gimmicky and distracting.  I live in the middle as I still get giddy when implementing a well designed rotation, but I also exercise restraint so as not to make my audience dizzy. I also emphasize the open and blank canvas that one can start with in Prezi - users have the opportunity to just get their ideas out there and connect them later. This remains the main reason why I love Prezi and will continue to use it.

Next up in either a joint post or in their own separate articles, I'll reflect on VoiceThread with their recently released and much anticipated mobile app for the Apple iPad.  I reported this from a preview during the ISTE conference, so I'm anxious to officially put the app through the ringer. And just yesterday on their blog, Google quietly released a huge upgrade of their Presentation editor found as part of Google Docs. Can't wait to dive in and explore the changes.  Welcome back to school everyone!

Facebook fans - get the latest posts, thoughts, musings, and giveaways. Give us a "Like" today.
animoto google docs presentations prezi review upgrade voicethread