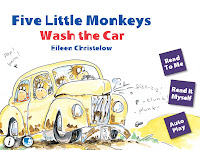 With a four-month old now in the house, my wife and I have been rapidly working on establishing a bedtime routine, and a large part of that routine involves reading bedtime stories. Although we will always have board books and hard copies of old favorites, I will admit that I enjoyed using the app designed by Oceanhouse Media, and written by Eileen Christelow, the cute story of how Five Little Monkeys Wash the Car. 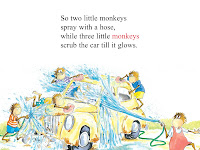 From the initial load (unlike many apps, this one starts up fast), the reader is greeted with a colorful title screen and then given the options to have the story read aloud (Read to Me), read automatically (Auto Play) or the user can proceed at his or her own pace (Read It Myself). If a story has already been started, readers have the option to resume from the bookmark or start from the beginning. I had fun exploring all three options, though it was the little details of the app's design that truly set it apart from others. 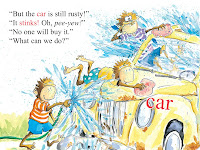 Instead of constant page turns which often lose its "wow" effect after a few minutes, Oceanhouse Media alternates between a more subtle page flip and a zooming motion (a la Ken Burns effect). Another clever feature is the audio that accompanies any image when touched. For example, touching the picture of the car will likely trigger the word "car" to be spoken as well as highlighted in the story and enlarged on the screen. This encourages a child to interact with the book and can lead to practice and further recognition of words, phrases and how they sound.

It is easy to spend lots of money on children's books as one wants to accumulate a library to choose from. However, with digital books such as those produced by Oceanhouse Media, priced significantly less than their hardcover counterparts, one can stock up on quality reads. Furthermore, these apps come with the additional interactive features that make reading and engaging with the content on the iPad fun and enjoyable, just as reading should be.

Five Little Monkeys Wash the Car from Oceanhouse Media is available for the iPad, iPhone, and iPod Touch in the iTunes App Store.