Is Angry Birds Becoming the Law & Order of the App World? 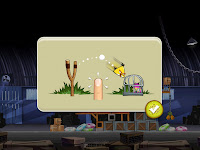 Article first published as Is Angry Birds Becoming the Law & Order of the App World? on Blogcritics.

Doink-Doink. You know those familiar two notes that could only mean that Law & Order was on that night. Faster than you can say "criminal intent", the Law & Order franchise branched out to include four additional series, three of which are still in production today. Although the original series concluded in 2010, the legacy lives on, and similar series (most notably CSI) have also dabbled in multiple productions. Is there an equivalent to this spin off effect in the App World? Look no further than those Angry Birds from Rovio.

Starting with its original addictive edition, the developers from Finland have been releasing versions of Angry Birds since December 2009 on multiple operating systems including Apple's iOS, Android, and Windows 7 among others. Mainstream fanfare reached a peak, perhaps, when Conan O'Brien introduced the recurring bit of a live action Angry Birds game on his late night talk show. 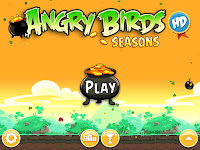 One of the first spin offs to hit app stores was Angry Birds Halloween, and this eventually led to Angry Bird Seasons, recently updated for St. Patrick's Day.  An upcoming tie-in to the movie Rio finds another stand-alone edition (Angry Birds Rio) available in the App Store and only through Amazon for Android users. Although all spin offs feature a free version, the no-cost options often provides just enough of a taste to usually get addicted players to plunk down the $1.99 or $4.99 needed to unlock additional levels. To Rovio's credit, the developer has updated all versions with new levels several times after each game's release.
How long can Rovio go before fans start getting saturated with Angry Birds mania? Or has a backlash already begun, and could mainstream gamers be itching for a new phenomenon?  Rovio is banking on more Angry Bird mania with a Facebook version coming out soon and numerous other ports in development. Time will tell, but given how long Law & Order made it, we could still be in line for a few more spinoffs. Can anyone say Angry Birds - Special Victims Unit?
For more thoughts on Teaching and Learning Technology, please consider subscribing to the RSS feed or through email.