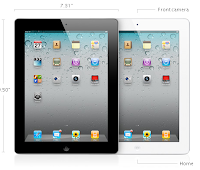 Interestingly, Apple chose not to utilize a live stream for this keynote, which might have given you reason to wonder just how big of an event they were considering the iPad 2 to be. Nevertheless, there were plenty of opportunities to follow along via live bloggers. And now that we finally have word from Mr. Jobs himself, how does the new iPad 2 compare to all the expectations and hype going into today's event?  Let's take a closer look at what was unveiled for the year of 2011, or the "Year of the iPad 2."


Built for Speed
Apple led off with the most important hardware component found on any computer: the processor. With a custom dual core A5 processor (according to Apple, the first dual core to ship in volume), the iPad 2 claims to possess a twice as fast CPU, and will run 9x faster in terms of graphics. The best part - and this was smartly revealed early on - is that the iPad 2

will maintain the same battery life despite these improvements. This is indeed one of the understated strengths of the original iPad. You don't have to hit to charger as often as you would expect.

Video and Gyro
As expected, the iPad 2 will ship with both front and rear video cameras, thus allowing for integration with FaceTime and for use with a new native app demonstrated later called Photo Booth.  The addition of a gyroscope opens up a lot of app development opportunities for tablets in the wild. With both of these hardware improvements, the iPad 2 will position itself more as an interactive device as opposed to a passive one where consumers simply take content from. This is in line with how the Web and Internet have evolved.

Thinner and Lighter
We knew the next generation iPad would be thinner and lighter. During the presentation, it was revealed that the iPad 2 will be 33% thinner (8.8 mm vs.13.4 mm). It was also a nice touch comparing to the iPad 2 to the iPhone 4 with the new iPad registering in at 0.5 mm thinner than the phone. It was also a nice touch to use the metric system as comparing the sizes in millimeters produces a larger sounding difference as opposed to comparing in inches. The weights were still given in pounds, and it is worth noting that the 1.3 pound iPad 2 didn't quite break the sub-1-pound mark.

The Rest is in the Details
With the big three (processor, video cameras, thin/light) out of the way, the rest of the announcements included the following:

As expected by many, there were no real surprises, and this could indeed be deemed a "half-step" in terms of hardware development. Still, the iPad 2 contains improvements without increasing in price. It will be interesting to see how well the product is received come March 11. In a future post, I'll dive further into the new iPad 2, with a discussion on what we didn't see and what lies ahead for iPad 3. For now, catch the keynote, the iPad 2 video (featuring Florence and the Machine), and the Smart Cover in action at apple.com.


For more thoughts on Teaching and Learning Technology, please consider subscribing to the RSS feed or through email.
announcement apple gadgets ipad 2 new

You never really indicate whether you endorse the IPad2 as being all that Apple would have us believe. Are you going to be standing in line on 3/11 to get your new toy along with millions of other Apple-ites? I plan on braving what's sure to be a circus at my local retail Apple store-- just not on the first day! What about you? Do you think it's worth the time?
March 9, 2011 at 9:42 PM

Good pickup. I did sort of half heartedly endorse the iPad 2. As a current iPad owner, I am not overly tempted to plunk down another five bills for the dual cameras and faster processing speed. I may end up selling the first gen iPad for #2 if the financials work out right. My guess is that we won't see too much craziness on Friday, nothing compared to those lines with the iPhone 3G that I endured several summers ago.
March 10, 2011 at 6:16 AM