Apple Releases iOS 4.3 - A Hands-on Review of the New Features 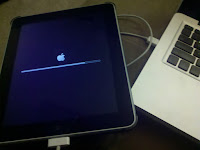 Article first published as Apple Releases iOS 4.3—A Hands-on Review of the New Features on Technorati.

Two days before the release of the iPad 2, Apple allowed those with iPods

(3GS and 4 GSM), and first-generation iPads

to upgrade the OS to experience the new features as revealed during last week's keynote presentation. So, what do new iPad 2 users have to look forward to, and will the updated OS bring new life to existing devices? A first day's report and reflection follows below.

After the usually grueling software extraction and update process (those looking to bypass the infinitely long backup phase, read here), I was up and running with iOS 4.3 in under 30 minutes. Here are some initial reflections: 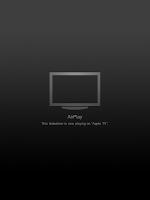 iTunes Home Sharing - With a 16 GB Wi-Fi only iPad, I don't have much space to play with. Apps and photos get priority, leaving music and videos stuck on my computer and iPod. With the introduction of Home Sharing on the iPad, I can now listen to any song and watch any video without having to pick and choose what to sync and without sacrificing precious tablet space. Of course, the catch lies in the word "Home". Those looking to stream items when off of their home network will need to look elsewhere or wait for the rumored streaming service sure to be in development at Apple.

Faster Safari -  The new Nitro JavaScript engine supposedly runs Java twice as fast, and although I seem to notice some faster loading of websites, I'm not sure whether I'm just buying the hype or if it's an actual performance enhancement.  This upgrade would best be measured with two iPads running the different operating systems side by side.

Side Switch - When I reviewed the iOS 4.2.1 update, I received a lot of comments about how users were angered over the forced change for the side switch. In a rare move, Apple has backtracked off its position  and now allows for user customization in choosing how the side switch functions. Could this open the door to future customizations (i.e. using volume toggles for tabs in browser) in software updates down the line?

Personal Hotspot for iPhone 4 - I'm currently re-evaluating my decision to go Droid for my phone, though it's not because of the addition of the hotspot feature. Remember, the personal hotspot feature requires a tethering plan, so unless you're interested in jailbreaking your iPhone, this will cost you another monthly subscription. 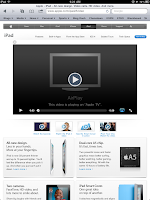 , I will admit that I now hardly use the device once the TiVo Premiere

entered my house with its NetFlix streaming capabilities. Still, I'd like to view photos, apps, and possibly websites through Apple TV via the iPad. With the previous iOS, photo streaming was clunky at best, apps that were AirPlay compatible were next to none and websites were completely nonexistent. With the iOS 4.3 update, I happily found that photos and slideshows streamed over Apple TV more smoothly, though video (when you can find websites that support it) was sluggish out of the gate, but smooth once playing on the big screen. It will be interesting to see which apps and websites will support AirPlay, as this still remains the key to the success of Apple TV.