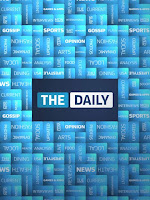 Much liked an over hyped summer blockbuster, The Daily for iPad news application was finally released last week after press announcements, promised release dates and tantalizing previews dating back to late last year. Within a few days, the app rose to the top of the free apps chart, and thousands of reviews chimed as users created a clear divide between 1-star and 5-star ratings. The main reason for the big attention for another free news app lies with the fact that The Daily touts itself as a new way of disseminating news on the iPad

. Let's take a look at what this app promises and manages to deliver. 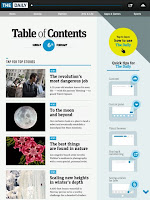 What $30 million buys is a nice design
I'll start with the look and feel, because The Daily app is news itself because of how it came to be. Built from the ground up, with a dedicated team of writers, designers, and $30 million in funding, The Daily is a reasonably polished version 1.0 application, and I liked both the carousel and top line scrubber (visual browser) for navigating the dozens of pages included. Images are vibrant and videos come to life on the iPad. There is something to interact with through swiping, touching, and tapping to play on practically every page. These interactions feel ingrained as part of the application as opposed to other apps, where they feel like they were added on just so multimedia could be included. There is also the ability to save articles for later reading. 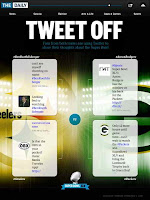 Daily updates, but will you be able to keep up?
With a solid design to build upon, the content is where the app struggled a bit out of the gate for this reader. For hard nosed reporting or up to the minute breaking news, you're going to be better off with your favorite news website or periodical (i.e. The New York Times, Financial Times, or The Economist). However, where The Daily may succeed is delivering up magazine type articles to readers on a daily basis. Think USA Today (whose app I do enjoy) with even more graphics, social media tie-ins (Twitter trending topics), videos, yet less news. Any time the Gossip section comes right after the News, I've got to question the priorities of the creators. Also, I'd rather read a magazine (which is how The Daily ends up resembling) weekly as I barely have time to take in my local newspaper and RSS feeds, let alone spend an hour with the supposed up to 100 pages of new content included with each issue of The Daily. 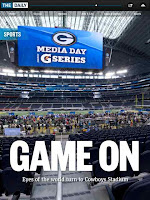 Still promising and potentially redefining
Although it may not be worth the time and money spent on the project, The Daily does represent a change in how news can be delivered. Unlike FlipBoard, I enjoyed the organization that comes with a news app designed for readers. And unlike other news apps such as The Economist, I feel like I'm getting a different experience than just a port of the paper edition. This makes me want to enjoy The Daily more, and as the app grows to include more of those cool features (the 360 degree view of Cowboy Stadium for the Super Bowl, animated football plays, and a fine Sudoku interface), I begin to see the light in terms of how the application could replace a newspaper or periodical subscription. 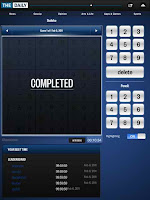 What needs updating soon
A lot of early reviews reflect frustration on the number of crashes experienced with the application. This is akin to someone closing your magazine every now and then and you're left to scramble for the page you last read. I experienced several crashes during my hours of exploration, though it seems that patience and applying the general iPad no-crash rule (don't touch the page when there's a spinning circle on it) seem to extend the app's longevity. Other users are mad about the included ads, and while they are a minor nuisance, they are also easy to spot (spinning circle, black background) and thus easy to skip. With weekly operating costs hitting half a million, I suspect the ads are here to stay.

The price is right?
Interestingly, I haven't noticed too much backlash against the pricing structure. The fact is that for $0.99 a week, or $39.99 per year, The Daily might have discovered a price point that users would deem to be worth paying for, especially if content is updated every day as opposed to once a month. It will be interesting to see what happens when the 2-week grace period included with the free app runs out for this first wave of users.

The Daily for the iPad is available for free in the iTunes App Store.

For more thoughts on Technology, please consider subscribing to the RSS feed or through email.
apps daily iPad news other review