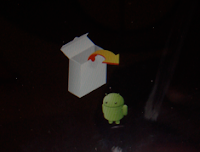 It has been a whirlwind of a week for all things Google with its eBookstore, Chrome OS, and Cr-48 notebook announcements. Android saw a Google Reader app appear last week (review coming soon), and Droid X

users were not to be left out as a quick check of "Settings, About, System Update", and this user found an update waiting for download. Check out the initial thoughts after the jump.

Full details about the update can be found through Verizon's support page.  The enhancements most exciting appear to be improved Froyo (Android OS 2.2) stability, a new data widget, and several pre-installs, including Flash Player, MyVerizon, and...wait for it...Madden 2011!

It's in the game.
I am not much of a gamer, but as a huge sports fan, I do enjoy a good sports video game every now and then. Thus, the addition of Madden on my Droid X is a welcome sight, and after downloading the update, I was anxious to see how the EA Sports title would play on the small (or big for a phone) screen.  It turns out that more downloading was needed when I tried opening the pre-installed Madden 2011 icon now in my app drawer. After 15 minutes (about 12 minutes longer than it took to install the update itself), I was finally in the game.

It's only part of the game.
Unfortunately, there is no such thing as a free Madden 2011 install, as the game that was included in the Droid X update turned out to be only a trial version. That being said, the demo lets you play a Super Bowl 2010 matchup between the Colts and the Saints. Overall, the gameplay was decent, graphics and sound were more than adequate, I like how the stopwatch slow-mo feature gives you more control of important plays. Faster than you can say "onside kick", the 3-minute game gave me enough of an experience that would tempt me to purchase the full version, but for $9.99 (conveniently in between the iPhone/iPad pricing of $7.99/$12.99 respectively), I'll probably opt for the iPad version instead.

As for the rest of the update, time will tell as to whether the improvements are noticeable. I know that Motorola has been working on some Microsoft Exchange enhancements, as well as responding to common user complaints about audio quality and volume. I'll continue to update this post if these issues have been resolved as well as whether there are any other observable differences in stability in general.

Update #1 (12/10): There's a new part of the dialer display that shows your most recent call in or out. The box also acts as a search engine for your dialer. For example, I could enter a few numbers, and there will be a dropdown that can show how many matches there are for the number combination. This is certainly a nice surprise, and a very welcomed enhancement.

Any other surprises found or care to share your feelings on the update?  Please leave a comment.

Unknown said…
What about the audio and volume problem. Was that ever fix in the update?

I have the Moto Droid (the first one). In my personal opinion, it is a P.O.S. There is some SERIOUS lagging issues in anything that I attempted to do with the phone now (not the first couple of months that I had it though.) Also, sometimes it doesn't let me know that I received a message (voice or text). I am really close to just chucking it against the wall and using the remainder pieces as a paper weight.

I am seriously thinking about getting the droid x, but keep hearing people say that they miss almost all of their texts and calls due to the poor loudness of the volume.I also keep hearing complaints about not being able to hear very well from the ear hole.

My Problem is that I don't want to get another phone that has the same problems I'm experiencing now, in addition to the new complaints with the Droid X. Sorry, I just had to vent (very frustrated right now).Any insight would be greatly appreciated.

chanatown said…
Hi Antonio,
I have read about the Droid X audio and volume problems, but I have not experienced anything that has caused overwhelming concern for me. With regards to your original Droid, I had similar issues with my iPhone 3G, so it may just be as the phone gets older and filled up with apps, music, and running processes, the device just begins to lag. I can hear my Droid X ring at middle volume just fine, though I prefer to use the vibrate function as I am often in the classroom or in meetings.

Lastly, at this point, you may wish to wait for a newer version of the Droid or explore the Samsung Galaxy (or whatever name it is for your mobile company).

Unknown said…
David,
I've looked into Verizon's samsung "Galaxy" phones but none of them seem to hold up to the Droid X or Droid incredible in comparison. So, just for confirmation, are recommending that I hold off on getting the Droid X and just get something newer than the Droid X to come out? I just want to make sure that I understand what you mean.
To be quite honest, I'm tired of researching it. It's pretty damn exhausting. So, no more research for me, your opinion will base my final decision. No pressure or any thing. (LOL)
December 17, 2010 at 1:12 AM

chanatown said…
Antonio,
Now that is some pressure. LOL. Here's what I'd say:
If you can wait, the Verizon iPhone is likely just around the corner in early 2011. Also, Verizon's first LTE (4G) phones are likely to be released in early-mid 2011. That being said, technology is always enabling a "new and improved" product in a matter of months, so if now is the time, then Droid X is the phone. Worst case scenario: try it out and take advantage of the 30 day trial policy if it does not live up to your expectations. Good luck - please check back in when you've made your decision (unless I really did just make it for you.)
December 17, 2010 at 7:04 AM