Creating and Editing Google Docs on the iPad 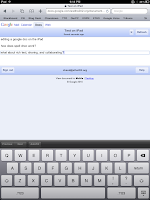 Article first published as Creating and Editing Google Docs on the iPad on Blogcritics.

I'm sure this one's been in the back of Google's mind for awhile now, and two weeks ago, it become a reality. Splattered across its multiple blogs was Google's announcement that Google Docs were now editable on mobile devices such as the iPad, iPod Touch, and Android 2.2 devices. Since I would much rather use a large screen to do any meaningful document editing, I'll offer a brief review of how the iPad experience compares to the standard browser. Together, we'll see how the Google engineers did, and whether the mobile experience will be a pleasant one.

It should be noted that this feature set is brand new, and I'm confident that Google will only work to improve the experience. That being said, here are the results of my Google Doc mobile experience on the iPad: 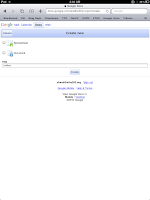 Clicking on the pencil/paper icon in the upper right of your iPad docs homepage, and you'll be prompted to create a new spreadsheet or document. After giving the item a title, you can start typing right or entering data into cells right away. I was pleased to find that the experience supports both portrait and landscape mode, so a longer typing experience is probably better served by the larger keyboard found on the sideways orientation. What's noticeably missing is the standard toolbar (or any toolbar for that matter). Thus, it's standard text and that's it. No bold, underline, italics, formatting, nothing. In fact, the only buttons available on the screen are refresh, help, sign out, and an option to use the desktop version (which was not supported on the iPad when I tested). Remember what I said about this being the beginning for Google. 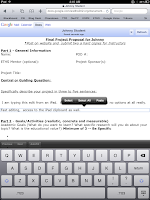 Editing an existing Google Doc
For documents or spreadsheets that you've already created, Google Docs offers limited editing options on the iPad. Clicking on the edit button in the upper right (if available, more on that below) gives you the ability to add, change, or delete text from the document. One cool feature was that the changes are made in near real time, similar to what users experience (and love) on desktop computers. The iPad seems to automatically refresh and changes are immediately reflected. The same feature set applies to spreadsheets, though I did not observe the near real time editing capabilities, but instead had to click on "refresh" to see if and when changes are made. 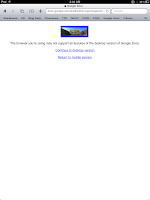 I mentioned "if available" for the edit button because I was unable to edit several documents on the iPad that I owned in my Google Docs. I verified that I was able to edit them on my laptop, so it definitely had to do with the mobile experience. Another flaw seems to occur when I enter edit mode on the iPad, there is no easy way to return to my docs homepage other than pressing back and then all docs. The good news about Spreadsheets is that neither of these errors appeared. I was able to edit every spreadsheet I opened, and I was able to return to "All Docs" through the button found in the upper right of the spreadsheet.

Conclusion
So, where do we stand with Google Docs on the iPad? It is safe to say that you won't be writing your 10 page essay exclusively on the iPad using Google Docs (OK, somebody probably will). However, as Google promotes in its YouTube introduction (see below), mobile editing of a Google Document or Spreadsheet would best be suitable for quick memos, group editing of proposals, and/or meeting notes. To this, the company may have a good start in this current version. Readers should note that there are other apps available in the App Store that gives Google some competition in the document editing arena, and many users already use some combination of a word processor app such as Documents to Go and an online storage solution such as Dropbox. It will be interesting to see how much usage Google Docs Mobile gets, and whether it can make a dent into classrooms looking at the iPad as a possible 1:1 netbook alternative. 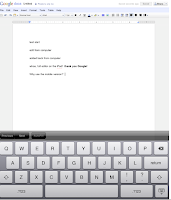 UPDATE (12/11): Faster than you can say "Instant Search", Google has updated its mobile editing iPad experience by allowing use of the desktop version on the Tablet itself. I tested this out and as seen in the screenshot, I was now able to access the complete rich text editor that was previously unavailable as described above. This makes for an enhanced experience on the iPad and already addresses some of the concerns I had with Google Docs on the iPad.

For more posts related to Google, subscribe to the Chanatown Google feed via RSS Reader or email.