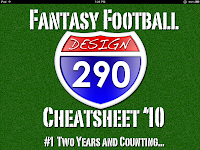 Back to school shopping, leaves changing color, shorter days, this can only mean one thing...Football Season!!! And that means it's time for some fantasy football drafts. Yes, prepare to lose hours of productivity as you scour the Internet for the most updated news on your third wide receiver. As drafts are already underway, I thought I'd take the opportunity to review the hands-down best iPad (and iPhone) app for your upcoming season: Fantasy Football Cheatsheet '10. 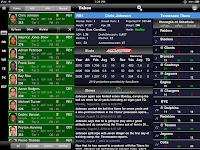 1st Half: The app at a glance
I've been using iPhone apps at my drafts for 2 years now, forgoing the paper lists and cheat sheets. This year, I'll be moving to the bigger screen with the iPad, and with that increased amount of real estate comes a whole lot of information. On the left side of FFC is the master list of players, sortable by position, predicted points, average draft position (ADP), average auction value (AAV), and manual rankings (click on upper left to edit). Once you click on a player, you can immediately add him to your team, take him off the board by marking him as "other", or adding him to your wishlist. A trash can symbol allows you to remove the label, and the X closes the player card. 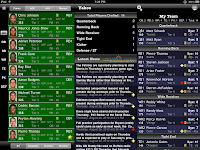 2nd Half: A wealth of information
In addition to the basic information about the player, you get 3 years of stats including a 2010 projection from Accuscore. Underneath the stats are recent news events from Rotowire.com. The right and panel shows the player's schedule, along with strength of schedule rankings. When the player information panel is closed, you can keep track of the total number of players on your team drafted by position, as well as the latest news for all players. There's a nice use of a popup when a news article is touched (see photo below). The entire visual organization of this app is amazing, borderline overwhelming, but it all stays within the realm of good taste in my opinion. The app will save me time and paper, making my drafting process more enjoyable in the end. 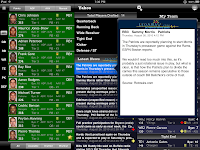 Overtime
We'll see what happens once the season begins. There are options to adjust the scoring setups for your league, so I'm assuming you'll be able to keep track of your players' stats. It would be nice to have some integration with existing leagues such as ESPN or Yahoo!, but that might be asking for too much from the folks at Design 290. As it is, I'm extremely impressed that I can manage multiple drafts with this app, and I can use the program offline, since we normally meet at a WiFi-less restaurant for our ETHS league.

Honestly, I thought I was going to have to do a app roundup similar to the one I did years ago. But, FFC '10 made this one a very easy decision. It was by far the most reviewed and highest app in the store, and for good reason. I'll be using the app in two more drafts this year, and will look for future versions in years to come. At $2.99, I'd say it's well worth the investment.